I don't generally click on links that promise free money in exchange of doing surveys, but in this case it was Elasticsearch and after suspending my disbelief, I decided why the hell not. A week after completing the survey I got an e-mail saying my free gift card has arrived, it was nice because that was already more than I would have asked. Can't say no to "free money" though.

My appreciation ended quickly, the link in the e-mail was broken, the promised money wasn't there :(. I contacted support, took them a bit too long to fix such a major issue (IMHO) but can't really complain about a gift.

However, the broken link I was sent raised questions...

The link everyone gets should in theory nicely redirect to the actual gift card page (as I saw, when mine was fixed). In my case it just got stuck, because it turned out they had ran out of gift cards by the time I clicked mine. Only because of that simple mistake I noticed the MD5 hash in the URL, just being curious I pasted it into Google and found out it's just a hash of a five-digit number.

Noooo, it can't be. But it was, if one hashes any other number close-by it also works, there's absolutely no authentication if the link given is generated by them, or if has been sent specifically to you. Ironically, only invalid links display a login form, those can be skipped. I don't think I have seen a sillier Insecure Direct Object Reference out there but there it was. What makes it especially interesting is that the "objects" in this case are real gift cards. 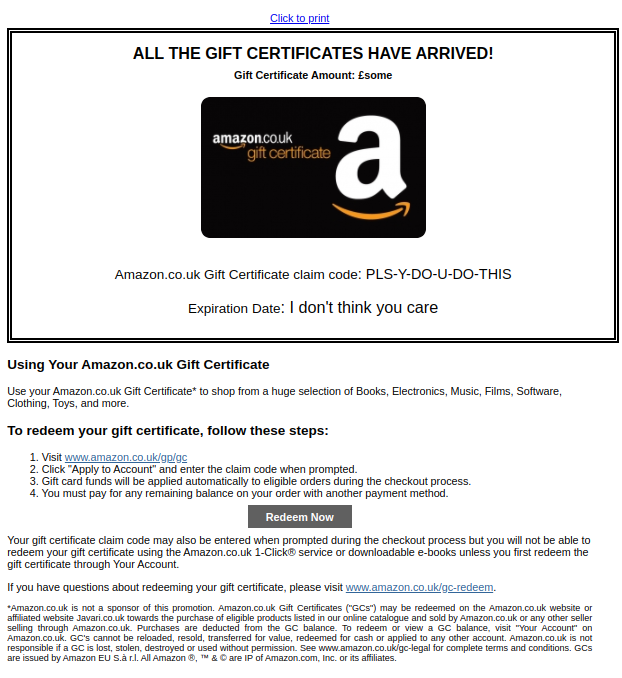